Garth Rockett was unlucky in his quest to give his owner, Phil Banfield, his 100th winner. Held up in a race where there was a good pace he made good progress in the final 2f only to find the leader had set good fractions and couldn't be caught. However, we were very pleased with Garth as he showed a good attitude and bounced back from a below par effort 9 days earlier at Leicester.
The phot shows Garth Rocket with, from ltr, Dave Rafferty, Zoe Waters and owner Phil Banfield. Phil has had 99 winners in racing and is still looking to get the ton up! 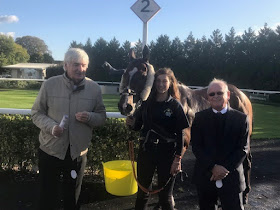