Garth Rockett followed up his win earlier in the month at Chelmsford with a win at Lingfield yesterday. It was a tougher race than the one he won at Chelmsford but he was given a good ride by Shane Kelly. From a wider than ideal draw Shane was able to go forward and sit mid division before beginning to close on the leaders and then send Garth for home at the 2f pole. Garth tenaciously stuck to his task and won by three quarters of a length.
His owner, Phil Banfield had been waiting for his 100th winner for over a year and then his 101st winner came 3 weeks later!
The photo shows Garth with the Trainer's wife, Denise, and lass, Kristyna. 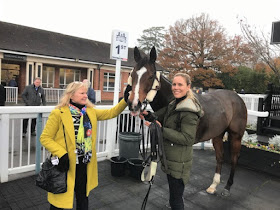