On the 21st October Young John won at Southwell showing great tenacity having been headed in the final furlong. YJ had been in good form heading into the race and the key question was whether he would handle the surface. However,he had been tried on the surface by his previous trainer back in late 2016/early 2017 and we were not worried.
He jumped well and was with the leader before taking it up turning for home. Although he was headed inside the final furlong, and looked beaten, he battled back gamely to get up close to the finishing line.
The photo shows one of his owners, Dennis Coooper, giving the horse a well deserved drink in the Winner's spot. 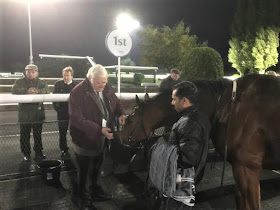