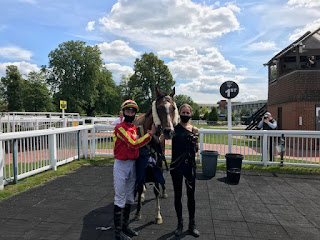 Garth Rockett recorded the 8th win of his career at Lingfield Park yesterday. The win was also his 5th win at the track and he clearly loves the place. He was given a very good ride by his jockey, Daniel Muscutt, who was able to give him the shortest trip round on the running rail. He made his move at the 2f pole and was able to slingshot the bend and had a clear run up the straight and galvanised Garth who has a real willingness to win.
We are thrilled for his Owner and Breeder, Phil Banfield, who was not able to make the race, and for all of his many followers.
Trainer at Monday, July 13, 2020