Yaa Mous ran out a convincing winner of the Filles 10f race at Chelmsford last night. The race went according to plan with Special Mission trying to make all and some 10 lengths clear with 2f to go. However, the plan was always to have Yaa Mous up with the leaders but in her comfort zone and once the leader started to tire it was set up for the horses in behind. Yaa Mous asserted in thr final furlong and this represents a step up on her previous win at Leicester.
The photo shows Yaa Mous being led in by lad, Hugo Meunier, who was substituting for her regular rider, Luke Seal, who has done a great job with the filly. 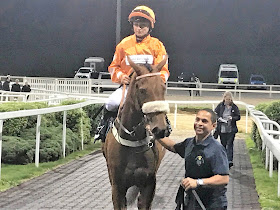